No Question: No Recession

It has been 10 years since the last economic contraction and a lot of investors feel like we’re living on borrowed time. As far as I can see, the only things they have to be afraid of are their own shadows.

This isn’t just my native optimism talking or even the privilege of having a vantage point in the form of starting my career on Wall Street in the ramp up to the 1990-1991 recession. I’m constantly scanning the economy for danger signs.

As I recently told Bloomberg in an on-air interview, I don’t see anything that lower interest rates won’t resolve. And even without the Federal Reserve on the horizon, the signs just aren’t pointing to a sudden downturn any time soon.

At the risk of sounding a little like Yogi Berra, every boom will come to an end once in the real world and endless times in Wall Street’s nightmares.

And a lot of those nightmares revolve around risk factors that are so hypothetical that it sometimes feels like investors are trying too hard to talk the boom to death before its time. 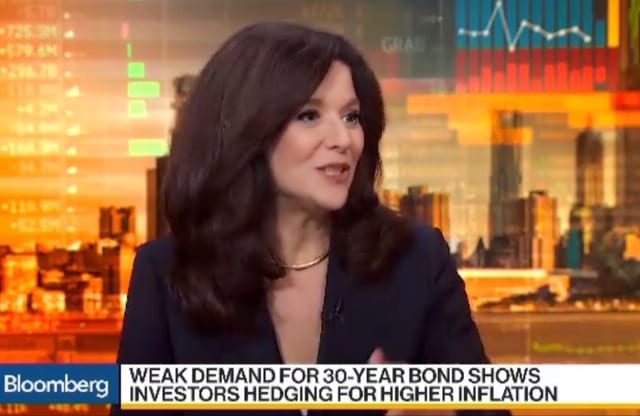 Hilary Kramer on Bloomberg: “Investors Should Be in Financial Stocks”

Trade the Data You See

Out of the dozen core recession triggers I track, eight are still flashing green for growth. Housing permits and retail sales have revealed that the consumer remains, at worst, guardedly optimistic, and strong job sentiment shows that Americans are relatively confident in their employment situation.

Jobless claims are tracking below job creation numbers, which demonstrates that while the labor market isn’t what Fed Chairman Jerome Powell considers “hot,” it’s still generating enough heat for hiring to stay ahead of layoffs.

On the corporate side of the economy, manufacturing orders, truck shipments and profit margins are still too robust to signal a recession in the near future. Executives around the country are budgeting for a boom. They aren’t circling the wagons or hoarding cash.

And corporate bond yields are still hugging Treasury rates fairly closely. This tells me that if a lot of companies are overextended, it’s nothing that the Fed can’t fix by taking back a rate hike.

Don’t get me wrong. There are always cool spots on the economic heat map that can turn icy if they persist or spread. Right now, I’m not thrilled to see money supply growth slowing while wage inflation stalls, but the first is a natural result of the recent rate hikes and the second is not exactly new.

The only real red flag here is the Treasury yield curve, which a lot of people have pontificated about over the last year as a clear recession signal. While a curve inversion has preceded every recession in recent memory, not every inversion brings a recession.

I’m thinking of 1998, when some middle-term bond yields dipped below their shorter-term counterparts amid stress in overseas markets. The Fed shifted from tightening to rate cuts in order to cushion the impact. However, it took 33 months (and a crippling dot-com crash) for the 2001 recession to arrive.

That’s practically eternity on Wall Street. Retreating to the sidelines at the first hint of inversion would have cheated investors out of more than 50 percent in upside.

Cashing out when the recession was called still left investors in the money. The worst declines came after the fact. Meanwhile, I took my dot-com profits and doubled down on deep values.

It really is that simple. While it’s good to be wary, if you sell every rumor of a recession, your money won’t get a lot of time in the market.

Banks Ready to Applaud the Fed

Admittedly, long-time market watchers spend a lot of time weighing the odds of a downturn ahead and looking for historical parallels.

The theories are endless. Some look to slowing car sales, while others worry that the U.S. consumer is staggering under too much debt to survive an economic slowdown.

It always boils down to hypotheticals: “if” the economy suffers a shock and nobody steps up to cushion the impact, here’s how the situation will evolve. This forces Wall Street to fight a lot of recessions that never actually happen.

We know the Fed is eager to use every tool available to keep the economy expanding. Lower interest rates will give consumers relief, make mortgages and auto financing incrementally more affordable and take pressure off of corporate balance sheets.

The yield curve is already improving as short-term rates recede ahead of a rate cut while the long end steepens. If that’s the biggest recession indicator you’re watching, it’s moving in the bullish direction now.

And a steeper yield curve is good for the banks. Even if rates overall go down, they’re able to borrow from the Fed more cheaply and put that money back to work on a more profitable basis.

I’m looking forward to seeing the bank stocks get back to work. Next week’s earnings calls will show us what executives at JPMorgan Chase & Co. (NYSE:JPM), Citicorp Inc. (NYSE:C), Bank of America Corp. (NYSE:BAC) and Wells Fargo & Co. (NYSE:WFC) think about the current environment and where they see opportunities.

I’m a fan of going big and small. Goldman Sachs Group Inc. (NYSE:GS) is already breaking above $210 on the prospect that rates are going down. There’s nothing stopping it from going back to $270 now.

On the small end, I still love First Hawaiian Inc. (NYSE:FHB) as a dividend play. With a 4% yield, you’re getting the chance to lock in double the Treasury rates. As those rates recede, the deal here will get even better.

Regardless of if we are in a recession or a boom, everyone on Wall Street is looking for replacements for low-yielding Treasury bonds right now. If you’re in that crowd, Value Authority has what you need.

But I want to leave this discussion with one last note regarding the risk of a recession as the current economic expansion has now become the longest in history. We haven’t suffered a significant economic contraction in over a decade. Are the statistics starting to get strained?

Going back four years ago, people started to become nervous that a recession was “overdue” once an expansion enters its seventh year. I have to say that prediction has yet to come true.

We aren’t necessarily living on borrowed time here. Expansions have gotten longer and contractions have gotten scarcer as central banks continue to develop better tools to keep the wheels turning.

As a result, while we could historically expect a recession every five to six years, the average expansion over the course of my career now lasts 101 months… and this one is still running up points while it lasts.

I’ve been cool on Big Cannabis lately as too many copycat cultivators have crowded into the market. One of them hit a hard regulatory wall this week and took other stocks with it in sympathy.

You know that I’m talking about CannTrust Holdings Inc. (NASDAQ:CTST), which failed a Canadian regulatory compliance test over the weekend for growing a literal ton of cannabis in unregistered greenhouse facilities.

It would have been relatively simple to get the licenses before bringing in the seedlings. The fact that CannTrust employees didn’t do that should send a chill across the industry.

And it raises questions about what other regulations the company skirted in terms of growth procedures, inventory tracking and quality control. Customers were left in the lurch and now other greenhouses are under scrutiny.

Investors fled. This was practically a $5 stock a week ago. Now, it has been cut almost in half to $2.75. The fact that it wasn’t in Turbo Trader means that we can now celebrate that decision.

However, these stocks often move too closely together on the assumption that they’re all interchangeable. Canopy Growth Corp. (NYSE:CGC), Aurora Cannabis Inc. (NYSE:ACB), Tilray Inc. (NASDAQ:TLRY) and Cronos Group Inc. (NASDAQ:CRON) are down 7-17 percent in sympathy.

I’m not mourning CannTrust. They can recover from this and do better. But everyone in the industry needs to recognize that this is not the Wild West.

You can’t hide production like some old-time gray market grower. Releasing unlicensed cannabis in the legal market depresses the supply-demand math and puts added price pressure on what is still effectively a commodity crop.

If cultivators are going to remain disciplined and grow to meet retail demand, they need to remain transparent about their capacity. It is not even about following government rules. It is about poisoning the shared pool.

The industry can police itself. Maybe this will teach Big Cannabis to do better.